Our general relativity and Quantum physics unit was our last unit of the year. In it we learned how time dilation worked, what space-time is, the workings of dimensions 1-10, and other crazy and super cool stuff that hurts your brain. Then we learned about nuclear stuff how nuclear bombs, radiation, nuclear meltdowns and all kinds of other fun stuff happens. This was one of the most the most fun and interesting units by far.

We also learned all kinds of physics concepts on all the things mentioned above. One of the ones that stuck out to me were wormholes. You wouldn't expect something like a wormhole to make sense, but in the end it fully did. The time dilation was another thing that made no sense in the beginning but made sense at the end. The dimensions we learned about were super cool, and they use the alternate dimensions to help explain wormholes. For example, a second dimensional wormhole could exist because the second dimensional plane was warped though the third dimension. In this case that means that a drawing on a piece of paper would see a hole in a folded piece of paper as a wormhole, because the paper was "warped" (folded) through the third dimension. Later, we began learning about nuclear particles and had a mini project on those which helped us transition into the last part, nuclear physics. We learned how fission and fusion work, and how fission can be used in everything from a bomb to a powerplant.

Overall, I really loved the quantum physics unit. The subject matter was mind bogglingly amazing and hard to wrap your brain around. Things like this are some of my favorites to learn about because they keep you captivated about the subject as you are trying to fathom how they could possibly exist. I am really proud of how much I have learned from this unit and how much it stays on my mind even now. The way it challenges my thinking is something that I truly enjoy. Ms Quinny, if you read this I recommend this unit specifically to your future students as it was by far one of the most enjoyable for me. 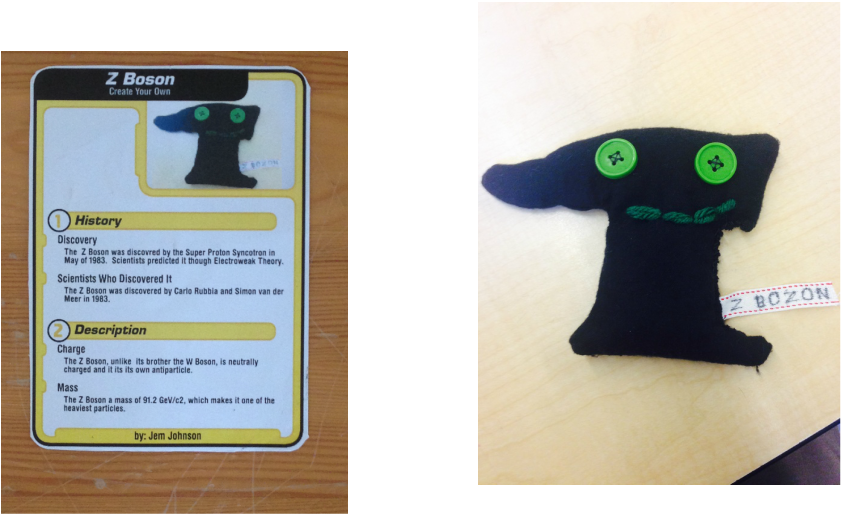 Here are pictures of the products from the Subatomic Particles unit. The one on the right is the stuffy that I made, repersenting the Z Boson. The Z Boson is one of the heaviest particles so l represented it as an anvil and filled it with beans. The Card on the left was my personalty card of my boson, who is fat and lazy and doesn't live very long, but has a huge impact anyway.