Happiness Project
For our Happiness project, we first made masks that represented ourselves symbolically out of paper mache. This was a long process as we had to build the masks from scratch, design them, and paint them. Then we created artist statements, which described our masks and the symbolism behind them. The masks and the artist statements were hung up on the walls anonymously. The next part of the projects was our expertise groups. We were assigned small groups where we became experts on a small topic, in my case how positive attitude affects your happiness. In these groups we made presentations and created activities for Festival Del Sol. We presented our Expertise and did well during exhibition. 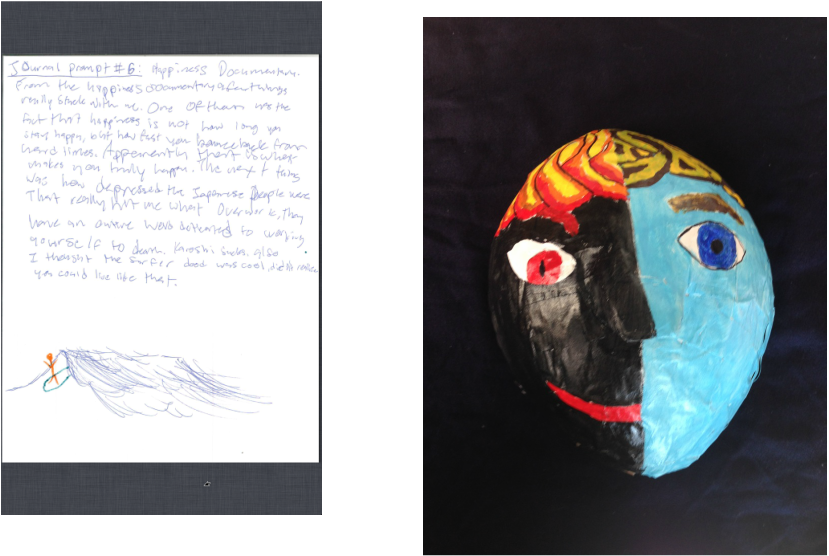 My favorite moment during the project was bt\y far the deer park monastery. That was one of the most unique experiences I have ever had. The way the monks carried themselves showed how truly happy they were. A close second was the build day. I really enjoy hands on things like that so it was right up my alley. I learned how of a leader I am because everyone thought I was the only one who knew how to use the saw.
Romeo and Juliet Hat
For our Romeo and Juliet project we made hats to represent all of the characters. My group was assigned Mercutio, who is a friend of Romeo and a kinsman to the Prince. There are theories about him being gay, so we wanted to go off of that and show the two sides of him in the hat. The front shows a straight teenage boy and the back is filled with rainbows and beads. 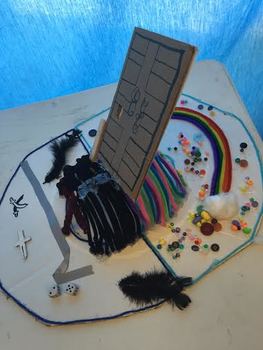 This assignment was a bunch of fun because we were allowed to be creative on how we built the hats. There were all kinds of weird ones from a halo and wings to antler things and a fish. We still don't know why there was a fish on that one. Overall, we made one "mistake" that we had to cover up,  but otherwise our hat was one of the best in my opinion.

Snapshot Comic Strip
This is the first in the line of book reports projects, or IR assignments, I will be showing. This one consisted of a comic strip from one part of the book. I read the book Unbroken by Laura Hillenbrand. I decided to do the comic strip focused on the scene where Louie, Phil, and Mac are in the rafts and attacked by a Japanese plane. This was a very dramatic and well written scene that really showed how bad of a situation the cast aways' were in and how much of a miracle it was that they survived. I showed this In a black and white drawing (except for the one scene) that really added to the dreariness of the scene.

I was very proud of my work on this one. I don't consider myself very good at drawing, but I feel like I added some really cool detail to the piece. I tried to accentuate how skinny the guys were by putting ribs and things on there. I was kind of disappointed that the plane was different every time, but it was hard to draw so I will give myself some slack on it. Overall I was very happy with how the comic strip turned out, with a few spots I disliked.

Movie Poster
This is the next art piece in the line of IR assignments. For this assignment we had to make a movie poster and proposal for a book that had not been turned into a movie. I read the book Leviathan by Scott Westerfield and used it for this project. I used the namesake of the book, the airship Leviathan, as the focus for the poster. The Levianthan is a genetically altered whale that is the animal equivalent of a blimp. We also needed a catchy slogan, mine being "In a Future, Long Ago." 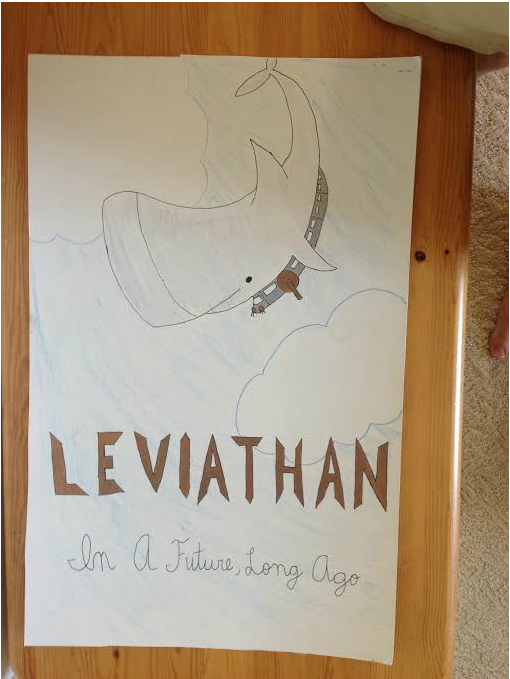 I was impressed with how well I did on this one. I created the font for the title and I think it looks really impressive and brings out the steampunk vibe of the book. I used metallic sharpies to make it look like metal. I was afraid the whale wouldn't look like a whale but it is easily recognizable as a whale. I think the carriage underneath looks kind of dumb but that is my only qualm with the poster. I was overall very happy with the finished product here.

Character Portrait
The character portrait was the last in the line of IR assignments. In it, we chose a character from a book and drew a portrait of then and wrote an accompanying essay. I read the book The House of Hades by Rick Riordan. I chose the character Leo Valdez, who is the son of the fire god in the book. I chose him because I related a lot to him, as he is restless and enjoys tinkering with machines. I represented him in a profile view playing with fire. 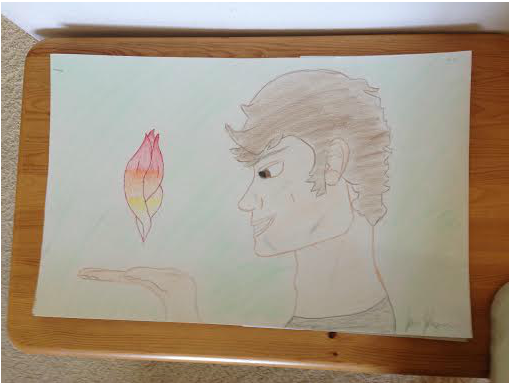 This was another art piece I was very proud of. I think I am most proud of this out of the three. The fire, hair and face all took me a really long time. I wish the fire didn't look so stripey, his hand looks a little broken, and his jaw goes too far back, but other than those I wouldn't change anything else. That kind of sounds like a lot but people are really hard to draw, especially in profile like that and get things right. Overall I am very proud of this piece.