For our Dia de los Muertos (day of the dead) exhibition, we made spoken word poems, and to accompany them, PVC instruments and drums. My group, group yellow, decided that we wanted a whapaphone (PVC xylophone) and two drums. We figured out the materials we would need to make the different notes on the instruments using frequency formulas we learned. We then made a supply list and scaled drawings of our instruments. Mrs. Quinny then bought our parts and we built all of our instruments, which actually functioned quite well. We did all of this in the month of October.

We learned about different types of waves in our project. Transverse waves are points on the wave move perpendicular to the direction of motion. In other words, it works like a wave at the beach, it goes up and down while moving forward. Longitudinal waves are the points on the wave move back and forth in line with the direction of the wave. They have compressions and rarefaction. Compressions are tight together, where rarefactions are apart. These work like a slinky, and compress as they move forward, but don't necessarily move up and down.


We also learned more about scale drawings. These scale drawings helped us know the measurements of all the parts of each instrument. We also learned a few things while drawing the different views of each instrument. We realized we needed to have each pipe an inch and a half away from each other. It also gave us a greater vision of what the whap-a-phone would look like. From the scale drawings we fixed a few mistakes and errors we wouldn't have accounted for, for example making a stand and support pipe so the other pipes wouldn't move around. These scale drawings didn't only show us what everything needed to be like but had to look at aspects of the instruments that were very important and without those aspects our instruments would've had many structure problems. We did a lot of harmonics worksheets in class, and those helped us figure out how long we needed all of our note pipes.
This is one of the scale drawings of our whap-a-phone: 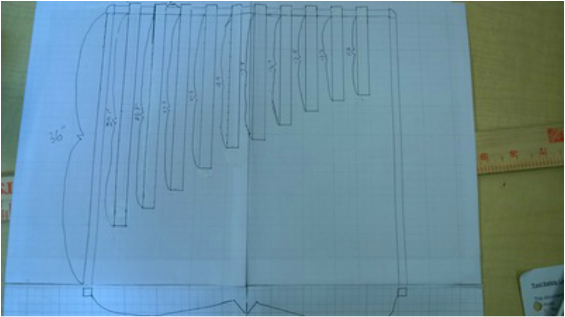 I was incredibly proud of our group, I thought we did an amazing job in our performance, and our instrumentals were among the best of all the groups. Our whap-a-phone was made really well and sounded really good, especially seeing it was one of the most complex whap-a-phones. Our drums were also well made and sounded great. I think we could have made a more complex drum beat, and one that went with our whap-a-phone beat a little better. Overall I was very proud of our group and how we performed.


Some of the Habits of the heart and Mind we used were refinement, because we had to change our plan for the whap-a-phone quite a few times. We figured out we had to change our stand from doing our scale drawings. We also used cooperation, because we had to incorporate everyone's ideas into our design for the whap-a-phone. We had also originally planned on only making one drum, but we had someone else who wanted to play so we made a second one.